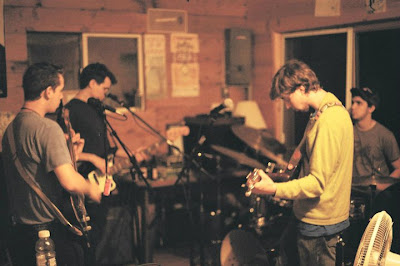 With a genuine focus on originality, Little House welcomes the unique talent that comes with every musician. Shaped by five close friends, all with different musical backgrounds, Little House’s sound can only be described as “good times." Forming by chance in the spring of 2010, their rapid productivity in songwriting has resulted in a vast repertoire of original songs and a very busy live schedule that has seen them share the stage with This Hisses, Cannon Bros, Olenka & The Autumn Lovers and Paper Lions.
In March 2011, Little House released their long-awaited debut EP 'Right Arm' on I'm Trying Records.  The EP was recorded in late October of 2010 at the Brewhouse, a large house in Winnipeg, MB where the band was living at the time. The result was a raw and energetic blend of catchy sing alongs, intense jam sections and soaring trumpet melodies. The band's greatest attribute though, is their captivating and dynamic live performance that will leave you wanting much more!
The band is currently focusing on writing and recording demos for their upcoming Album, which is to be released in 2012.


Little House - It Wasn't a Binge (She Said, She Said) by I'm Trying Records